From my previous blog post, I mentioned that I have two clients now in the bag. When i re-started my photography, I thought I'd focus on landscape photography. That's why most of my photos from about two years ago are mostly of buildings and sunsets and trees and flowers. But the more I go deep into photograhy, the more I am inclined to shoot portraits and people photos - people are, of course, more interesting. But unlike shooting landscapes, where, most of the time you shoot in a "landscape" orientation, shooting portraits are, most often done in a "portrait" orientation. (Doh!!!)

But the thing is, I am too much a product of my time - too much typing and mousing (I do freelance science writing too) gave me this splint-casted wrist. So, having the camera on a portrait orientation puts too much stress on my right wrist.

So, I decided that, if I am going to be serious about portraiture then I should do something about this.

I decided to get a Canon battery grip

. This grip adds considerable weight to my DSLR but my wrist has no problem with the weight as long as it's not bent. The added convenience of not bending my right wrist greatly outweighs the inconvenience brought by the added weight. And also, the grip really makes shooting in a portrait orientation more natural.

There are controls on the grip also so you wouldn't need to fumble for buttons or the main dial when in portrait "mode." My only gripe is the dial at the rear of the camera is about an inch farther when in portrait mode. That would take some adjustment on my part. Also, I should also remember to turn the grip on before I can use it. 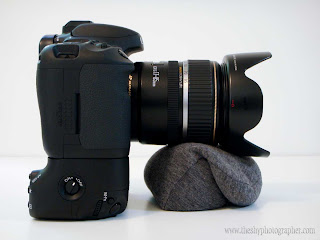 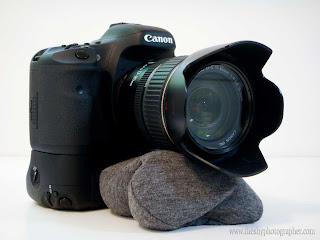 With the grip attached, my DSLR looks like a tank and looks like it's gonna do a lot of damage. And that's how I like it. :) 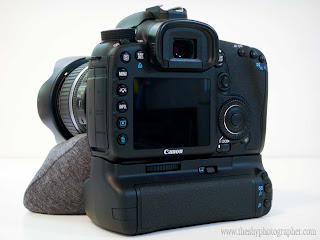 batteries at the same time. The additional battery increases the number of shots that I can take. Also, if ever I ran out of charge then I can use six AA-batteries via the included AA-battery cartridge

that's already included. It's always nice to have that option.

Disadvantages? Well, so far, the thing that seems to be a great negative with using a grip is the added height of the camera. Well, I expected that to happen, but what I didn't expect is the effect it'll have on my two camera bags.

Aside from that, I have no gripe about the grip - get it? :)

But, I don't want to be tied down by a tripod when I do portraits so I instead put on my Blackrapid 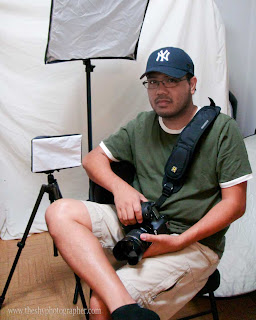