I have another iPod that I couldn't let go, one that has served me for almost a decade already: my orange iPod Shuffle. I bought that when I decided I wanted to jog outdoors. The iPod 5.5 Gen was so clunky to use while jogging that I decided the Shuffle would suit me best while exercising (the irony here is, the iPhone 6+, which I also use for jogging, is much bigger than the iPod Classic). And back then, I begun to like the color orange, so I decided to get the Shuffle in that color. 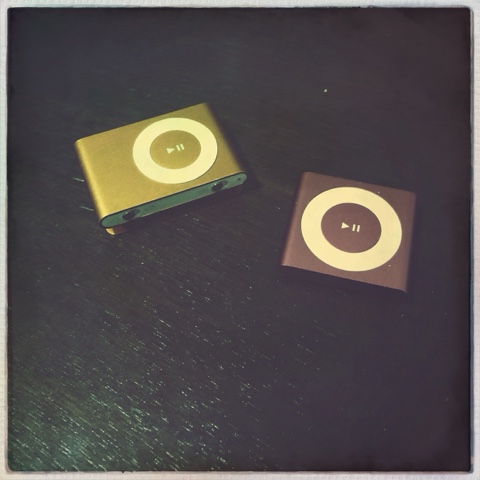 It was kind of liberating. I made a smart playlist that is under 1 GB big, with songs that fall under the category "Rock" and which have not been played in a month. (I've since moved to "techno" for my exercise music.) I just clipped the Shuffle to my shirt and started to run. 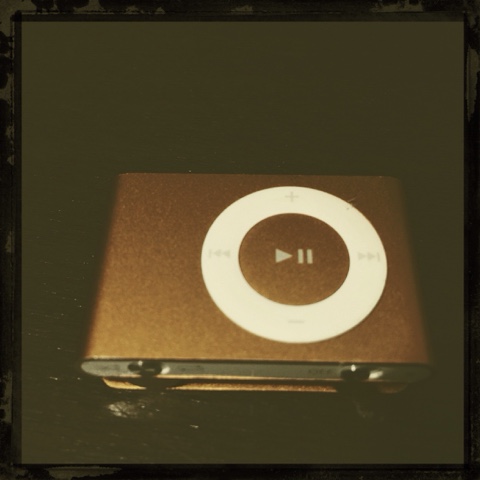 But, as with all things electronic, the first to go is either the battery or the hard drive. For the shuffle, as with my 5.5 Gen iPod, the battery gave up the ghost. This wasn't really a great problem with the big iPod because I just needed to connect it to a power source and it will play.

The Shuffle battery problem, however, cannot be solved this way. This is because the charging port is the same as the headphone port. So the Shuffle cannot play music and be connected to a power supply at the same time.

This is one of the problems brought by the over-simplification of almost all Apple products. (I see the same thing with the new MacBook: you cannot charge the MacBook and charge, say, an iPhone at the same time...) 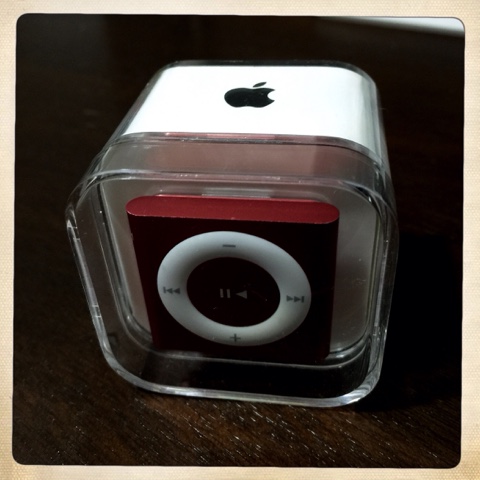 But, it turns out the nephew has two extra iPod Shuffles that he is not using. So I asked him if I could have one and he agreed, but only if I get the pink one. I didn't mind. It's not orange, but for other colors, I really have no qualms. (Apple has also discontinued the orange color for some time already.) 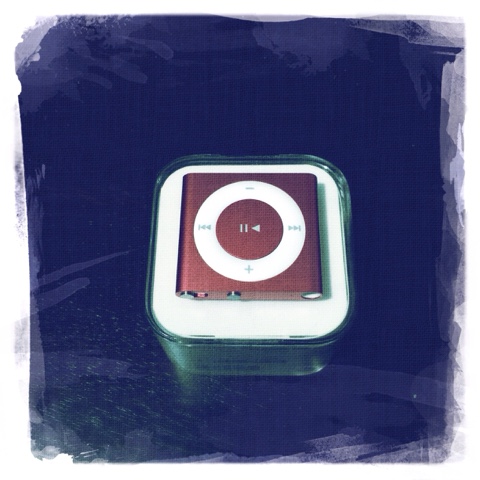 So, I have now revised my playlist. It is now worth 2GB of electronica music interspersed with rock & hiphop. I bring the pink Shuffle with me and I use it at the gym. I even use it while moving about. It's clipped to my shirt and, thankfully, it responds to the new(ish) Apple EarPods with remote. 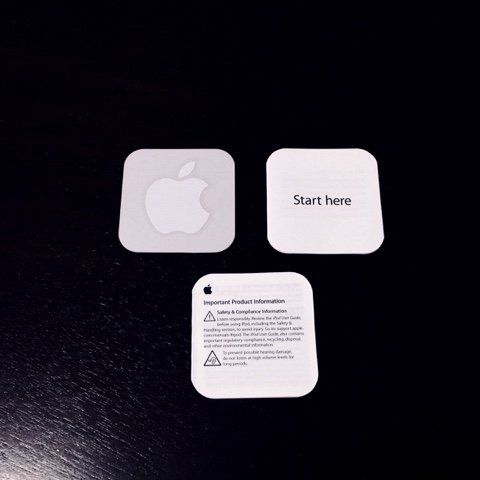 My problem with this generation of Shuffle? It is hard to clip the thing into anything without pressing the "Back" button. And I can't seem to memorize the button presses required to activate the "VoiceOver" functions. 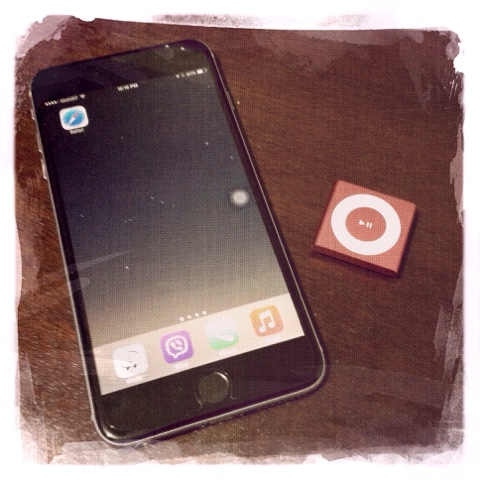 One solution is to just lock the thing and just control the iPod with the in-line remote on the EarPods. Another way is to put your pointer and thumb on the corners and your middle finger at the back of the Shuffle. However, that solution is really not so easy and I still end up pressing the back (or reverse) button... So, just lock the thing up by long-pressing the Play/Pause button. 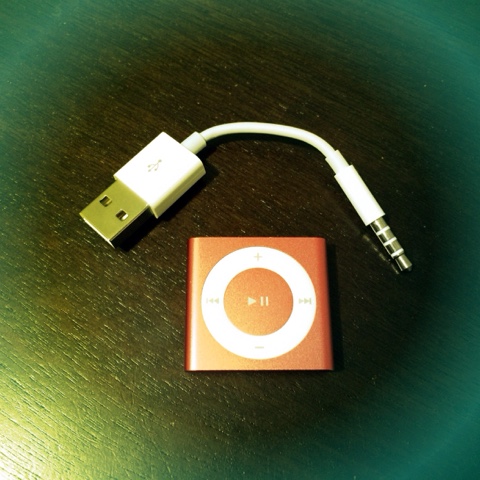 And the "VoiceOver" thing? When you buy a Shuffle, you are essentially giving up control to the iPod. It'll play things that are in it. The absence of a display prevents you from knowing what's coming up. That makes the use of a Shuffle very interesting. So I really don't pay that much attention to VoiceOver.

My orange Shuffle? It'll be preserved and will be an heirloom of my house. 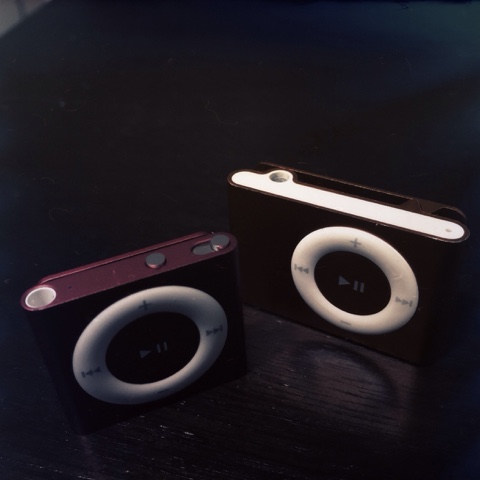 Photos shot with an iPhone 5s using the app Hipstamatic:

Posted by garybc at 9:19 PM No comments:

The Jedi Mind Trick of Apple

Anyway, it was a long time coming but I just realized that Apple is doing its version of Jedi Mind Trick with all of us. In a good way.

When Apple removed the disk drive on Macs, the company got a lot of backlash. The same thing happened when they removed cd drives. And most recently, Apple got a lot of negative reactions when, with the new MacBook, the company decided to put only one USB port on the computer, USB-C, both for charging the device and connecting your other peripherals. Of course you cannot charge the computer and, say, connect a wired USB harddrive. If you want to do that you will have to buy Apple's adapter - one which many people suggest Apple should have included in the box. So, like myself, if you want to use a wired HDD for Time Machine, you will be forced to include the peripheral when you purchase the new MacBook.

I agreed with what the reviewers were saying and I decided, without trying the MacBook, that it is not the computer for me.

Until when the wife lent me her 11-inch MacBook Air... 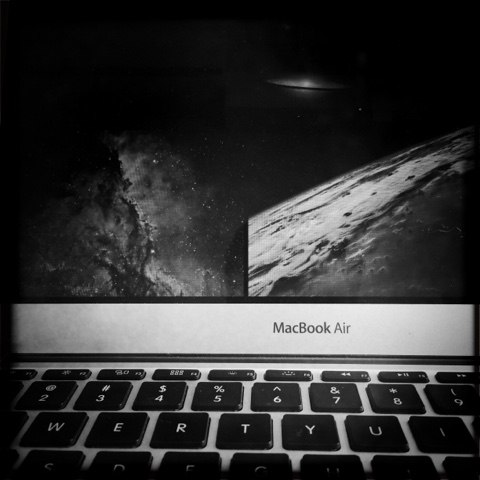 I want to be mobile. I am not the sort who would like to keep an 8 to 5 job. I don't want to be tied down to an office desk or, like in my previous life, a classroom. I want to be able to move anytime, any hour. And all I need is something to type on. In months past, I tried it with the iPad and I found it really difficult to type on the glass screen. So, I decided to bring my bluetooth keyboard with me. Which I found ridiculous... The combined weight aside, the iPad-plus-keyboard setup is really no different from having a light notebook. And the notebook is really more convenient since it has a higher storage capacity and is more powerful than an iPad. And when I bought the iPhone 6+, I was able to do with the phone what I am able to do with the iPad. The bigger screen of the 6+ afforded me the opportunity to type drafts and outlines of blog posts, edit iPhone photos, and read ebooks more conveniently. I can even watch subtitled Japanese animé on the 6+ without squinting my eyes.

So, with the iPhone 6+, I didn't need to bring my iPad out of the house as often.

Which still does not solve the problem of having a real keyboard...

The wife lent me her 11-inch MacBook Air one time when I needed a computer. (Note that I have a 13-inch MacBook Pro at home which I use for editing photos and videos and not much else. For everything else, I use the iPad/iPhone.) The wife believes that I am old(er) now and I should not punish myself by bringing heavy stuff on extended periods. So, when I needed a computer, she told me to just bring her MacBook Air instead.

I really enjoyed it!

Not only is the MBA much lighter than the MacBook Pro, but with the flash drive, everything feels more flashy (I would have used flashier but it doesn't seem to convey my meaning...). Applications open and load faster, the computer wakes from sleep on a considerable shorter amount of time and yes, did I say it is really lighter?!? I haven't tried using Photoshop on the MBA but I really did not intend to do that. For, me, the "heavier" stuff is meant for my "other" computer...

So, this brings me back to the new MacBook. 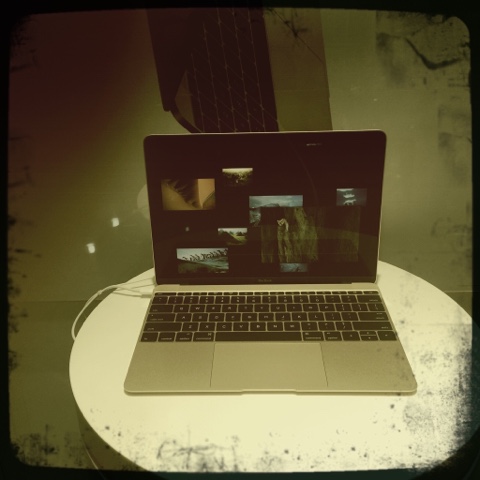 I think Apple is easing us up to what is to come. When Apple removed the disk drive, the firewire port, the CD drive, they are just, as Steve Jobs quoted a famous hockey player before, going to where the puck is moving. They don't want to be stuck in the present: they want to show the world how the future will look like - they want to invent the future, and they want to let us use it *now*.

Of course you won't be able to shoot sports, or birds or wildlife with an iPhone, but how many DSLR owners *actually* do those things?

One of my most common concern when I first saw the computer was: how will you be able to charge the MacBook AND, say, an iPhone at the same time? The answer: use the adapter. And where will you place your gigabytes of media when the MacBook only has, at this time, a maximum capacity of 512 gigabytes? Well, you can use an external drive for those, sync some to your iPhone, and leave the external disk at home. That's what I do. I have collected a lot of music and movies thru the years and I don't expect to hear and watch all of them in a week or so. So, I make a playlist for favorites and a separate playlist for songs I have not listened to in, say 6 months, and I put those on my iPhone. I won't need to sync my iPhone for a week and I still would have music that I have not listened to in a while.

With the MacBook, Apple is giving us a glimpse of the future, one that most people will need, one that people with powerful desktops, or laptops, at home can use as a second computer. Apple has shown what mobile bloggers, like myself, would need while in a coffee shop here in Metro Manila; or what a composer needs when inspiration strikes while in a cab ride; or what a photographer needs to edit his photos on the go, one that does not require big applications like Photoshop or the like.

So, despite what reviewers said about the MacBook keyboard (I have learned to get used to it in the brief moment I tried it in store), no matter how many people disparage the machine for having only one port (two if you add the headphone/microphone port), and no matter how many people say the gold version is kitsch, I believe that, outside of professionals, the kind of machine that the MacBook is is what people needs.

On a final note of this musing, I find it amusing that what I feel is the best set up for a mobile person is to have a big phone, like the iPhone 6+ and a small computer, like the new MacBook: I believe this is just the way Apple set it up. And their Jedi Mind Trick is working on me...

And yeah, it had been working on me since that fateful month in 2006...

(Typed on an 11-inch MacBook Air when inspiration for this write up hit me up while I was waiting for the wife and while I was seated in a fountain area.)
Posted by garybc at 11:21 PM No comments: