Canon just had a press release for a new DSLR camera, the Canon Eos 60D

and a slew of lenses also. But despite this press release, there is something else that I am aspiring for, something that has been on the Canon catalog for a long, long time:

, can be found on my wish list. It is an L-lens (for luxury) so that is a really good quality lens. However, it is also one of the expensive ones. So a lot of thought process will be involved on whether I will take the plunge with this one or not. If ever I buy this, this will be my first L lens.

There is another alternative, the

lens. With the f/4 lens you get a longer reach and the image stabilization (IS) will give you about three stops of hand-holdability. However, the aperture of the IS lens is one full-stop smaller and that factored into whether I'd go for the f/2.8 lens or for the f/4 lens if and when the right time comes.

So how does that one full-stop bigger aperture compare? Well, the closest I can do to answer this question is by using my Canon EF 50 f/1.8

because this is my only lens that can go bigger than f/4. I took several shots of one of my books, The Physics of Superheroes

, and compared how the different aperture openings stack up. 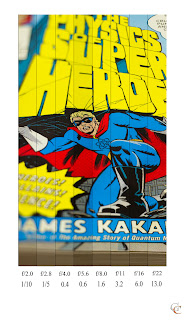 You can tell from the pics, or slices of pics, the difference in the bokeh for a given aperture and the corresponding shutter speed. The focus for all shots were on the eyes of our superhero. White balance was set in-camera and the only other post-production edits made were boosts in brightness and saturation. All shots were made with one full-stop difference from one shot to the next. I also included f/2.0 here though the lens I am considering goes only to f/2.8.


As far as I can tell, there is not much difference in the bokeh between f/2.8 and f/4 though the difference is noticeable from f/4 to f/5.6. The shutter speed didn't matter when I took these pictures because I put the camera on a tripod. For low-light situations however the bigger aperture opening would be a very big help. In the defense of the f/4 lens, it has image stabilization (IS) where you can get up to three stops of hand-holdability. 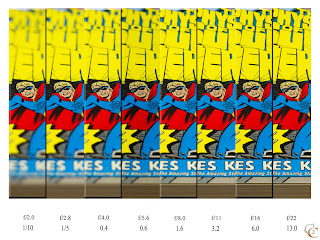 Would I really want that hand-holdability? What does that really mean? Well, if the scene is dark, then the IS in the lens will enable you to still get decent shots without blur, right? But that blur-less shot will only be possible if the subjects themselves are completely stationary. If not, then the IS won't really matter.

Take, for example this shot that I took one cloudy, late winter afternoon in Atlantic City, NJ. 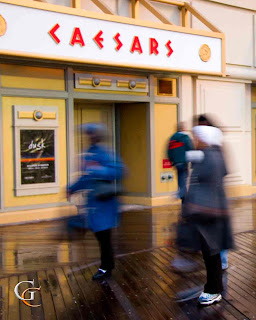 lens to make this shot. Because of the image stabilization, I was able to get this shot at f/4.5, 1/5 of a sec, at ISO 500. You can see from the shot that the building is sharp despite the extended shutter speed. The image stabilization worked! But the problem was, the people were walking around and, because of this, they were just blurry figures in the shot. Well, two left feet were sharp. I knew I could have increased the ISO to freeze the people up in the shot but that is not what I want to illustrate.

What I want to say is image stabilization is not the answer to everything. Sometimes, you need a really bigger aperture to make the shot work!


Given the chance, I would like to get that 24-70 f/2.8 lens. I don't mind that it has a shorter reach, nor the fact that it doesn't have image stabilization. I want the bigger aperture. The only thing that would give me pause here is that, on an APS-C camera, the 24mm would be equivalent to 38.4mm. But my point-and-shoot camera has a smallest focal length at 35mm, so the shortest end of the f/2.8 lens won't really be a problem.

And I believe the f/2.8 lens would be a very good portrait lens. I might give up my trusty-50 if ever I own the L lens. Who knows?


If only Canon or somebody would sponsor me a lens... That'd be really fine. Anybody willing to make an early Holiday wish come true? :)

Any comment regarding the pros and cons of either lens will be greatly appreciated.
(Update)

Part 2 of this post can be found here.
Also, I update the title to convey that this is the first of two.
----
Texts written on my iPod Touch.
Posted by garybc at 1:34 AM