, most are free, some are paid for. But for me, there is only one that I can consider the best: 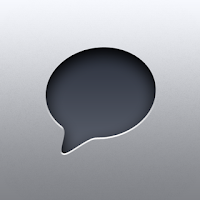 The Tweetie app by Atebits was bought by Twitter several months ago, though I have been using the Tweetie app since its first iteration. I paid a good $2.99 for the first one, if I remember the price correctly, and when the second iteration was released, I paid another $2.99. There was a great commotion regarding this second paid upgrade and people went up in arms on why they should pay again to update the app. People wanted to have a discounted price if you have the previous version though, even if Atebits wanted to, there was no in-app purchase back then.

Twitter App for the iPhone has a beautiful interface, can connect to both Instapaper and Read-It_Later,   can browse and compose in landscape or portrait mode, can send pics and videos to your choice of service, and can shorten URLs, among other capabilities.
All of the other Twitter apps for the iPhone/iPod Touch

have most, or all, of these capabilities. But why do I consider the Twitter app to be the best? It is because of the wavy lines that you can see here. 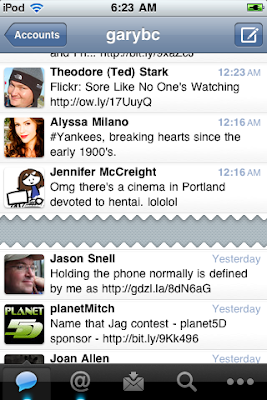 You see, if you don't read tweets for some time, then you will have a build up of tweets and the app will only give you the latest given number of tweets. But, there is a break between the latest tweets and the tweets you have read last. If you tap between those wiggly lines, then the Twitter app will give you the tweets in between! Still have some missing tweets? Just scroll to the oldest tweet you have read and tap between the wiggly lines again. (I don't know though what is the limit to how many times you will be given this set up.)

Most of the Twitter apps that I have used are not capable of giving me those missing in-between tweets. And for that, I consider the Twitter app, formerly Tweetie 2, the best Twitter app for the iPhone/iPod Touch.

(Twitter can be downloaded here [iTunes will open]. After Tweetie 2 was bought by Twitter, the app has now become free, which made the app even better!)
Posted by garybc at 2:08 AM