Don't Delete Based on the Camera Display

I've been practicing a lot of portrait photography lately and my hapless (and helpless) "victim" most of the time has been the wife. Sometimes, I get friends to pose for me. But, of course, most of the time, the wife is my subject.

Anyway, we were enjoying a break from the heat one afternoon, so I decided to take some pictures of her. A typical photo session would yield about a hundred shots, though I sieve through some of the pictures based on what I see from the back of my camera. After that, I load the pictures up on my external harddisk

drive, back it up, then go through with the rest of the pictures again on my computer. I delete some of the pictures that were not in focus, were not properly exposed, etc.
One of those pics that made it through was this picture. It was a high-key shot and I added some grain in post to add character to the picture. 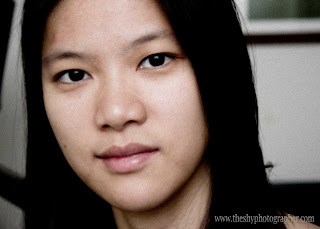 However, the next time I take photos, I will not delete based on what I see from the back of the DSLR

anymore! I don't know how it happened, but there was one shot that did not get deleted because it was underexposed. Perhaps it is because I am now developing a habit of not looking at pictures after every shot - known in photography as chimping. When I saw the shot in Adobe

Bridge, the first thought that came to my mind was - Lt. Sharon Valerii! And I am a big fan of Battlestar Galactica

!
I was so relieved that the picture wasn't deleted. The picture was underexposed so I increased the exposure by half a stop in post. It was shot at f/5.6 and 1/10 of a second - handheld. The ISO setting was at 800. I am so happy with this! Here is the shot: 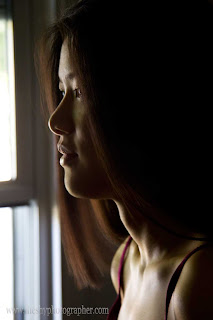 Lesson learned? Do not chimp and do not delete based on what you see on your small camera screen.
Posted by garybc at 11:31 PM