One of the assignments in the photography class is to use different shutter speeds Drag the shutter to show motion or use a very fast shutter speed to freeze time. Aside from learning a lot from the class, I love the challenge that it brings. Also, it kinda forces me to do the things that I wanted to do all along but couldn't bring myself to do. Out of laziness? Perhaps... :)

One of those things is to shoot water splashing.

One day after eating, I noticed that water is splashing on the plate that I just used. I was going to fully close the tap when I notice the pattern being made by the water droplets. So, I stacked pots one on top of another so that I will be able to view the droplets sideways. I used an ordinary bedside lamp to light up my set up (I realized that my speedlite won't be able to keep up with the camera's 8 frames per second shooting rate). 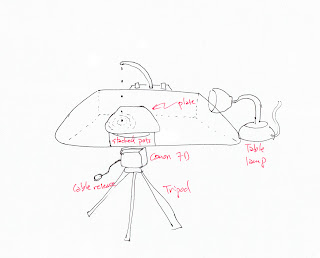 I used a cable release

so that I will be able to time the droplets. I had to put the camera on a tripod

so I won't have to worry about camera shake.

There are two things that made this venture difficult:

I had to set up the camera on manual focus or else the camera will keep on looking for what to focus on. Also, I wanted the sharpest part of the picture to be the one where the droplet after the splash is at its peak. What I did to make sure that the focus was perfect was to turn on Live View mode of the 7D and zoomed in. Next, the timing also had to be perfect. I took a lot of pictures and most of them were shots before the drop hits the water or when there were only ripples left behind by the event. This is where the cable release was crucial because you can see the droplets from formation at the tap to the actual splash down. The high speed shooting rate of the Canon 7D

is also very useful here. I would have wanted to have something faster but 8 frames per second was sufficient to get the job done.

lens so that I wouldn't have to raise the ISO as much. Speaking of high ISO, if I wanted to get a fast enough speed, I was required to set the ISO to a value that would give me a fast shutter speed. The 7D performed well and there wasn't much noise despite the high ISO value.

Here is a sample shot:

I'm very happy with this shot.
Posted by garybc at 1:05 AM