On a previous post, I said that I was inspired by some of the great photos that were shot against a really black background. An example would a set of great images made by Yousuf Karsh. I was greatly fascinated by that. So, I decided to do it myself and it proved to be a very nice exercise and learning experience. After I have practiced with the wife's stuffed toy, I proceeded with making a portrait of the wife herself.

This was my set up: 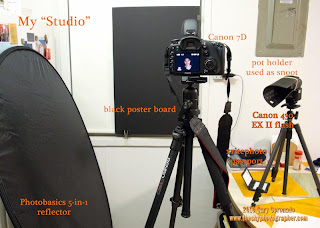 I don't have a studio yet, but that doesn't mean that I couldn't come up with decent images. As made obvious in Rick Sammon and Vered Koshlano's book Studio and Location Lighting Secrets

, "You don't have to use thousands of dollars of studio gear to get professional quality results..." That had been my mantra ever since I read that book. And also, not having a real studio is forcing me to be more creative in getting my shots and made me focus more on how to get the shot that I want!

Anyway, back to the shot...

I used a Canon 7D, an off-camera speedlite and a black reflector. The black reflector was used so as to subtract light that will go to the subject. I don't have an "official" snoot, so I used a pot holder, secured by a rubber band to prevent the light from spilling towards the background. White balance was corrected using the xrite color checker passport and I used a black poster board as background. The aperture was set at f/1.8 and the shutter speed was set at 1/250s - the speedlite's sync speed.

I used a black reflector because I really wanted an f/1.8 aperture to get a shallow depth-of-field and the only way I could have compensated for that was to use a faster shutter speed. But the shutter speed won't go any faster than 1/250 and if I used a white reflector, then I wouldn't have achieved the effect that I wanted for my shot.

The flash was fired towards the black reflector that I held right in front of me - I was holding the camera with my right hand, the reflector with my left hand. The light that was reflected off the latter was a nice even lighting and that was used to light up the wife's portrait.

Note that the ambient light supplied by the ceiling lamp, as seen from the shot above, had been constant all throughout the shoot. The fast shutter speed was enough to black out the image and enabled me to isolate the light, coming from the speedlite, to illuminate my subject.

This is the shot: 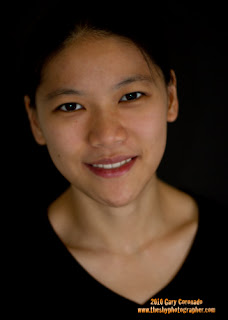 What one can do with just one speedlite! I am very happy with the result that I got. Next up, I would like to use another speedlite to separate my subject from the background. But that will be for another blog post. :)

Equipment used for this shot:

(My review of Rick Sammon and Vered Koshlano's book can be found here.)