A week has passed since the iPhone4 announcement. During that time, I was busy editing pictures of my client so I wasn't able to write anything about the gadget. But during my bouts with Photoshop, I still couldn't get the iPhone4 off my mind.


(As of now, as I write this, based on the Tweets that I have received, the websites of Apple and AT&T are being slammed with pre-orders for the iPhone4.)


Now, I know a lot of people are going crazy with the new phone and I would be a hypocrite if I say that I wasn't blown away when iPhone4 was announced - the websites going down are proof enough that a lot of people are pre-ordering the phone. But I still have misgivings about biting the bullet and getting the iPhone4 with a 2 year contract. Primarily there are two reasons:
I know they may seem the same but let me reiterate that, though they are brought about by the same company, they are two different things.

First, as I've felt since 2007 when the first iPhone came out, I still would have hoped that Apple launched an unlocked iPhone. There is a work-around in my dilemma by buying a phone without extending my existing AT&T contract but I would still have a locked phone. I mean, I could get a decent unlocked phone for half the price of a locked, contract-free iPhone. $500 for a locked phone?!? I'm not crazy enough to give in to that... Also, as far as I know, after the two years are up, I still wouldn't be given the unlock code for the iPhone. The company, as history tells us, will just extend the contract by offering the future iPhone for two more years. I know a two year old electronic gadget is already considered aging and needs to be replaced but there is a principle here involved. If I have already fulfilled my obligation, I should be able to do whatever I wish with my phone, iPhone or not.


Second, I know there are a lot of complaints regarding the AT&T 3G coverage in major cities and I think I've been a victim of that. This is the number 2 bullet. The wife and I went to New York a couple of weeks back. If you've been following my blog, you know that I've been using a combination of the Nokia E63

and an iPod Touch

. Now, when I'm at home and in neighboring towns, I'm quite happy with my phone. But, when the wife and I went to New York, my phone kept on rebooting. I was surprised by that and, during that time, I thought my phone is on its death throes. But, when we went back home, my phone acted normal again. So, I thought that the problem was not the phone but actually was New York, or rather AT&T in New York. You see, the Nokia E63 is a dual-mode phone which can switch from GSM to WCDMA automatically. I think that the phone is trying to latch on to the WCDMA frequency in NY but when it can't then the phone goes through an indefinite loop and then crashes. I know the phone is not supposed to crash but it goes to show that the AT&T 3G in New York is really spotty. Now, even if you have a crash-proof phone, which I know does not exist, it'll be useless data-wise if you have spotty 3G. Would I pay $15 at least for something that I cannot enjoy much less use effectively?


And finally, I am wondering, what has happened to the first iPhones to come out in 2007? Did most people who got the first gen iPhone upgrade to the 2nd gen? 2nd to 3rd? Will 3rd gen iPhone owners upgrade to the the 4th? So is there a grave of locked iPhones somewhere where all of them are laid to rest?


This just came in - iPhone4 is available unlocked in Canada. And in the UK... Why can't Apple be more flexible here in the US? Hello, Apple?


Related article from @engadget can be found here. 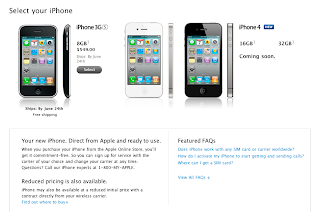