More than 24 hours later, I am enjoying my new iPod Touch more and more. Nope, I didn't get a new one - I upgraded its OS to iOS4 and my iPod feels brand spanking new!

I upgraded the OS yesterday before my trip to New York so I wasn't able to enjoy the new OS much yesterday. But during my hour-long train ride to the Big Apple, I was able to put my apps inside folders and changed my wallpapers - yes, there is an "s" there, one for the lock screen and one for the desktop. Now, playing with my iPod, it seems as if my iPod is faster than before it had the new OS. Mail is now much better with the new, unified mailbox; I was also able to add another Microsoft Exchange email.

I now have only two pages of Apps - one is the default apps that I access most of the time, the others are located inside folders which are, in turn, on the second page. I am a happy camper... :) By the way, you can only put a maximum of 12 apps inside each folder. Also, only 9 of the 12 are shown, as you can see below.

When you tap a folder, all the other apps, or folders, fade out and only the folder and its contents are clearly visible. (It's this attention to detail that made me really fall in love with Apple. How come others did not think of showing what is visible inside folders? Why show only generic pictures for all the folder that you have on your desktop?) This is Apple's Quick Look, I believe, for the iPhone. 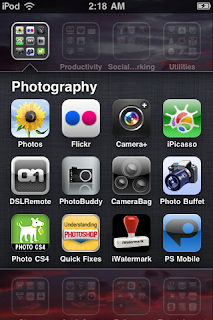 iBooks was also updated from an iPad only app to a universal app so now I'll be able to read books from my iPod, though the Kindle app is still my primary mode of reading in the iPod Touch. This is because I am primarily reading from the Kindle

itself. Now I am eagerly awaiting the Netflix app to land on my iPod Touch.

And then, of course, there's one of the most anticipated feature of the new OS - multitasking. So far, I was able to run 8 apps and I did not notice any slow downs with my iPod. Push the home button twice and you will be able to view all the apps you are running. The apps will become transparent and the running apps will be the ones that are in normal view. You can swipe left and right to view the other running apps and the left most set consists of iTunes controls. 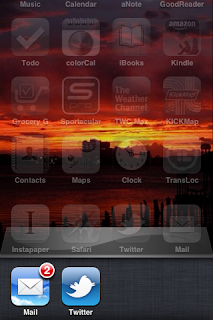 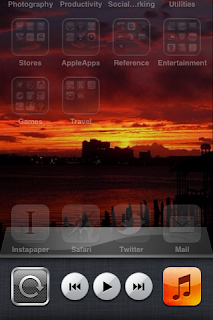 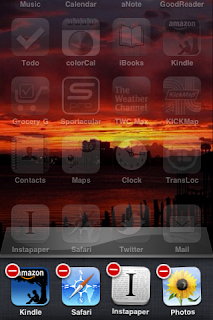 For now, I will put my iPod more through its paces. I would have to observe if the battery life of my new iPod will be reduced by the multitasking apps or whether it won't be that great an effect, though I do noticed that it has been the fastest drain from 20% to zero after I have upgraded the OS.
But as of now, I'm definitely enjoying the new OS and I hope to discover a lot more features.

Oh wait, I forgot to mention the best feature - the new OS is free! :)

-- Text written in my iPod Touch
Posted by garybc at 1:27 AM