About f/stops and Apertures

When I saw the AdoramaTV video regarding the f/stop of a lens an “a-ha!” moment presented itself to me. You see, I have two consumer zoom lenses:
The “a-ha!” moment goes like this: if I compare the lens opening of the two lenses at their widest, then I would get a bigger aperture opening. This can be shown by doing the math:
My heart jumped out of my chest with the realization that I, essentially, have a “faster lens” with the 70-300mm than the 17-85mm for the same f/number. 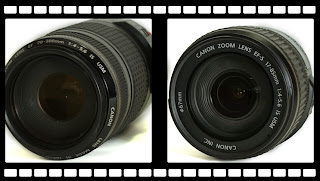 Alas, my head stepped in and calmed me down and the more rational aspect of me prevailed. So what happened? I came to the conclusion that “all f/stops of the same value are created equal - f/4 is f/4, f/5.6 is f/5.6, etc no matter what the focal length.
How? 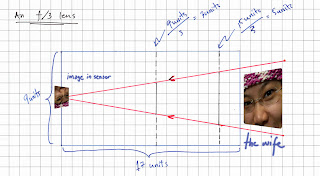 What does that mean? If you look at the red arrows, which represent light beams, you can see that, whether you are at 9 units or at 15 units the light beams converge in the same manner. Simply, for the same aperture stop, the sensor is illuminated in the same way! Thus, you get the same amount of light whether the opening is 3 units or 5 units for the same f/stop.

This empirical measurement, albeit of only 4 values, prove that, for the same f/stop, no matter the focal length, the measured shutter speed will be the same.

So, once again, the rule to be learned from this is that all f/stops of the same value are created equal!


You can find a lot of great and informative YouTube videos from AdoramaTV on this link.
Note: To read more about illuminance and f/stops, I recommend this wikipedia entry.
Posted by garybc at 1:30 AM