(Part 2 of my review, Image and Video Quality, can be found here.)


I had a slight dilemma last September: Canon just announced the big sensor Powershots G15 and S110. Both have a 1/1/7-inch Digic5 sensor, both can shoot RAW, a really important feature for me, and both can shoot 1080p videos at 24 frames per second.


However, the G15 won out and I will discuss below the two features that swayed me towards the G15's way. Yes, two features were enough...


First let me discuss the common features between the G15 and the S110... 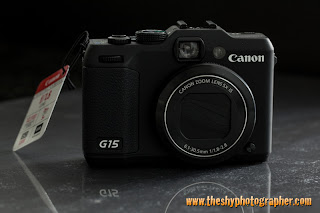 You can shoot in full auto, Program Mode, Aperture Priority, Shutter Priority and Full Manual. You can use the different scene modes, like Toy Camera, Tilt-Shift, HDR, etc. You can, of course, shoot up to full HD videos at 1080p24. And most importantly, you can now zoom while shooting videos! This was a really glaring absence in the Canon G12. 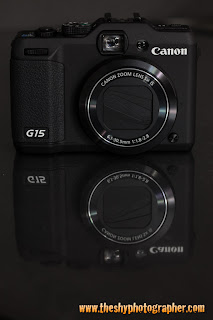 You can shoot RAW photos, JPEGs of course, or both RAW and JPEGs at the same time. However, when you use the different scene modes, you will only be able to save JPEG photos.


The flash is now hidden and is activated via a mechanical switch. This is, for me, the one point where the G12 outshone the G15. I would have wanted the flash at a fixed position so that I can have an extra dial for ISO, like what was on the G12. Anyway, when you're done with the flash, you just push it in. You can set the built-in flash for full ETTL mode or full manual; you can have slow synchro and also second curtain sync. There's a red eye lamp to prevent that dreaded red eyes from your photos but, a warning, the lamp can be blinding. Yes, it is really strong. 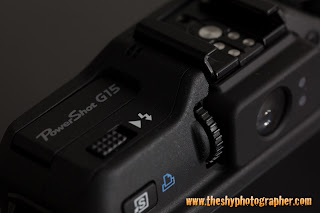 There is a new Face ID feature. This feature will bias the camera to focus on the recognized face first rather than on the other, less important faces (emphasis mine). Yes, it's gimmicky, but it seems to work... First, you have to register a person's face - up to five times, so you can choose to register a person's frontal shot, from two opposite angles, with hair up, or down, what have you. Then, you register the person's birthday! I know!!! So, when the person is in the shot and the camera recognizes him, then the camera will focus on him. Or, if it's a person's birthday, the same thing will happen: if the camera recognizes her, then focus, brightness, and color will be prioritized in her favor.


The G15 has a 3-stop ND filter in case it's really bright and you want to shoot with a long shutter speed. However, the shutter speed tops out at 15 seconds, so, keep that in mind when you shoot your silky water... 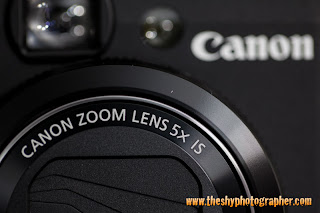 Another feature that I like about the camera is the ability to assign a dial for adjusting preset focal lengths. When I am shooting in Av- or Tv-mode, I assigned the rear dial for this function so that, with one twist, I can go from one preset focal length to another. The preset values are 28, 35, 50, 85, 100 and 140mm (at 35mm sensor equivalent). By the way, the S110 starts out at 24mm focal length so it will make a wider picture from the same vantage point.


These are the common features found in both the G15 and S110. Now for the features that are only found in the G15. 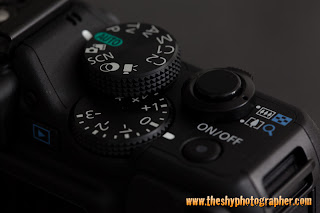 The G15 has, actually, more buttons than the Canon Eos M, which I find quite ironic. Well, OK, the Eos M has a touchscreen making up for the absence of some of the buttons. 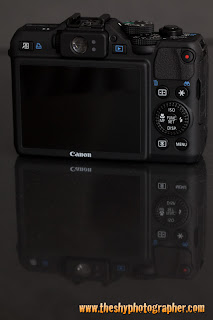 For some, the absence of an articulating screen is a big letdown. But it is not such a big loss for me since I didn't use it that much in the G12 and I don't really require it on either of my DSLRs anyway.


There is a hotshoe for an external speedlite. This is one of the reason I chose the G15. I wish that the G15 has the ability to control off-camera speedlites, but having this hotshoe means that you can attach a wireless remote to control speedlites, well, remotely.


On either side of this hotshoe are the stereo microphones for those times you want to shoot videos. There is a mono speaker to check if your audio was actually recorded. However, I wish that there is a way to attach an external microphone to help out with video capture. 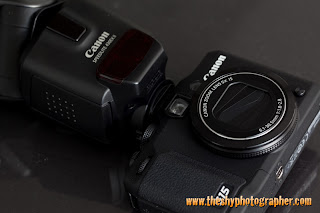 You can attach a remote control when you need one. There is a mini-HDMI port and an audio-video output.


I am not an advocate of chimping but in the G15's case, I highly recommend it. 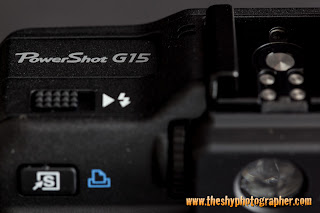 
Well, the most obvious difference between the two new powershots is the size. The G15 is bigger, definitely, than the S110. To say that it is pocketable is a stretch - yes, your jeans pocket will literally stretch to accommodate it. However, since it's now (almost) winter, I can easily put the G15 inside the inner breast pocket of my coat. Here I show the size difference between the G15 and the wife's powershot. 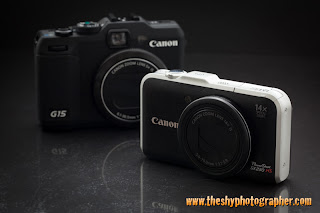 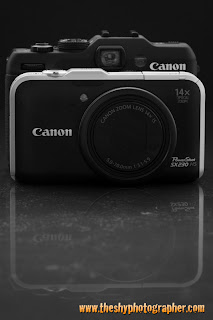 Compared to the G12, the G15 is both slimmer and lighter. My guess is that the absence of the articulating screen made the G15 slimmer. This slimmer profile makes the G15 slightly pocketable.


You see, this is what camera makers often do not tell consumers: the maximum aperture size decreases when you zoom in. And this causes the shutter speed to be longer which, in turn, causes blurred photos in low light conditions. If I have chosen the S110, the aperture range would be f/2.0-5.9. That's a very narrow opening at the telephoto end. I don't like that at all. Even the Canon G1x is worse: f2.8-5.8. However, the G1x has a bigger sensor going for it... 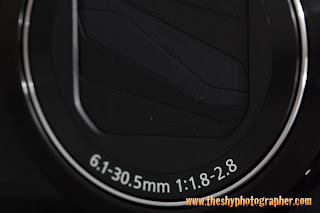 The S110 has wifi so you can easily share your photos. Would I want that? No. I would like to look at my photos first using a big computer monitor and only share about 20% of the pictures that I took. I never share everything. If you have a camera that automatically shares all your photos automatically, you might end up sharing 200 photos of a 5 minute affair, with cropped heads, people with chopped off feet, blurred photos... Well, people do actually do that...


I would have wanted to have GPS built in the camera for easy geotagging though. This makes remembering where you take the shot a lot easier - an important feature when you are traveling... 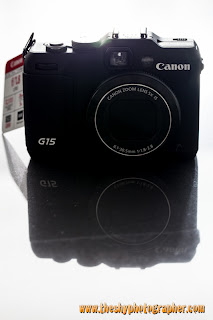 The construction of the Canon Powershot G15 is really, really good! There is a rough matte on the surface which helps on gripping the camera. There is an actual grip but it is so tiny that it only slightly helps. I suggest putting on a strap, your own or the one Canon provided - I almost dropped the camera once! Thank goodness that I always have a strap on all my cameras. I never go commando!


All-in-all, I love the camera and it would now be my daily camera companion. Yes I have my iPhone always with me but there are still a lot of things a dedicated camera can do that a camera phone can't. If you are only interested in posting photos to Facebook then your camera phone might suffice. But if you are serious about photography, if you plan on printing your pictures, then the G15 is a good way to go. 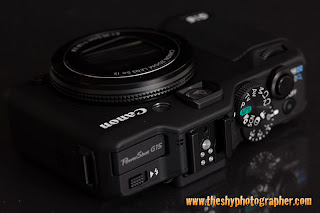 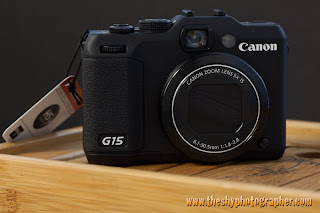 In Part 2, I will discuss about the picture quality, video quality and how the camera handles in the real world.