Requiem to the iPod 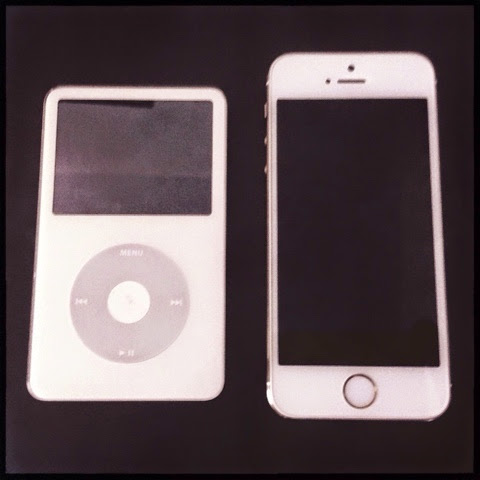 2006 had been a great adventure for me. The wife went to Princeton University to get her PhD in Astrophysics and I went to the US with her. Also, we had just been married for a month so it really was a transition: living in the Philippines to living in the US; from being engaged to being married...

When we were looking at our Princeton options, on where to live, if we should get a car, on where to buy *real* winter clothes (no, the options then, those that were sold in Metro Manila, were not really meant for freezing and sub-freezing weather...), while looking at those choices, I saw a flier sent by the university. It was a flier that told the wife that part of her scholarship was a laptop of her choice. There were four choices then: a 13- and a 15-inch Dell notebook and a 13-inch MacBook or 15-inch MacBook Pro.

I got intrigued by the prospect of using an Apple notebook...

I goaded the wife to get a MacBook and she agreed. She reasoned that, based on her research, a lot of university students use MacBooks and she really was leaning on getting that.

The move was completed. We went to the US and settled there as a married couple.

And the wife got a  Macbook. And her Astrophysics degree.

And I became a lifelong Apple fan. I got jealous... The wife was really settling in with her white, polycarbonate MacBook whereas I was using a Linux laptop. I loved the Linux OS but OS X Tiger had its own appeal. Whenever the wife's home, I tried to use the MacBook. I actually loaded all of my music into her computer and we played music from that.

It was in December 2006 that I felt that I couldn't hold out anymore. We were in California, then visiting relatives, when I decided that I needed to have my own Apple device. Back then, I used a harddisk-based MP3 player: an MPIO...

Navigation was bad, interface was horrible. And songs are stored in folders. Oh, and there is a limit to the number of songs that can be stored for each folder or else the player will hang. Just imagine wanting to hear a song only to find that it is located in a different folder... And which folder?!? You will have to figure out first where the song is and only then will you be able to play the song.

So, I decided that my entry point to everything Apple was the iPod. That December 2006, I made my first purchase at the Apple online store (it was actually my first online purchase ever!). And I never looked back.

I synced the iPod, the 5.5 generation (the first that could play videos) to the wife's MacBook (the first Intel-powered MacBook) and that was essentially it. All my music went there (less than 20 gigabytes) and it became my constant companion anywhere I went. I took it when I jogged, whenever I walked around Princeton, whenever I took pictures.

The wife and I even attended a party where the "DJ" was one of the graduate students and his iPod. In one of those parties, Public Safety was called because of the loud music; the iPod really was a disruptor both good and, at that instant based on the neighbors' reaction, bad...

And yes, the iPod had been my entry point to the Apple universe, the so-called Halo effect. I eventually got my own 15-inch MacBook Pro, an iPod Nano an iPod Touch, (on the 5th birthday of my MacBook Pro) a 13-inch MacBook Pro, an iPhone 4, an iPad 4th generation, an iPhone 5s. Windows OS now seem alien to me and the Linux OS now is so unfamiliar... (I don't even remember where the "Start" button is...) 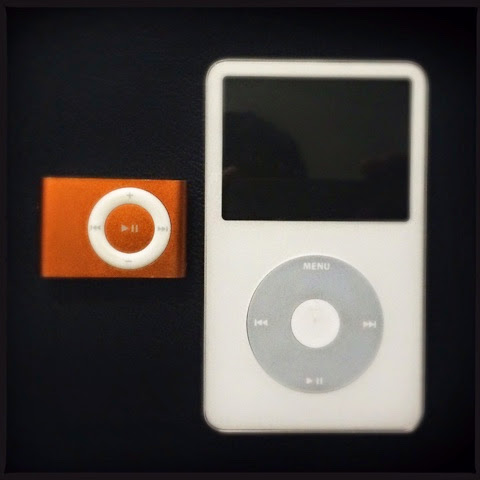 But the iPod did not only serve as my gateway to Apple hardware. Because of this nifty gizmo, I also bought iBooks, songs, tv shows and movies on iTunes. Yes, Apple got me hook, line and sinker. Eventually, my media files grew and so I bought an iPod Classic with a 160GB harddrive. Because of this, and a fading battery life, my original iPod has taken a backseat...

When the iPod's battery finally died, the wife bought a desktop alarm that can accommodate the iPod's 30-pin connector. It woke us up and served as the soundtrack of our US lives. We took it from Princeton, NJ to Chicago, IL, where the wife had her postdoc.

Now we're back in the Philippines. The iPod, I brought it back with me. I couldn't seem to part with it. Right now, it is sitting on a mantle in our new apartment and sometimes it is used, well, more often than not, as a paper weight. It sits beside another relic of a different age - my orange iPod Shuffle (that color has also been discontinued along time ago, much to my dismay).

Then, after the September 9, 2014 Apple Keynote, the iPod Classic, the only harddrive-based player, disappeared from the Apple website. Perhaps it is because now the iPhone has a 128GB and maybe, pretty soon, a 256GB one. Or maybe that capacity will never come because Apple will be pushing for streaming media instead of having everything stored on a device. Perhaps because Apple feels that the click wheel has outlived its usefulness and instead people now opt to just pinch, click, drag. Perhaps because people now can no longer fathom the idea of a single-function device.

Perhaps because, as the market has dictated, anything smaller than a 4-inch screen just won't cut it.

But here in the Philippines, where wifi is painfully slow and 4G/LTE is not readily available anyway, media needs to be stored in the device. The cloud is not really that accessible here especially when one is on the move… So your music, movies, files, they need to be stored locally. A big storage is needed for this. With the bigger capacity iPhone 6/6+, most people’s need for storage, including those of Filipinos', because of the lack of fast internet, will be met. Maybe. And in October, when Apple outs new iPads and iPod Touches, (and I assume the new iPod Touches will have the same screen sizes as the iPhone 6/6+), you will not even need a cellphone network provider to enjoy the higher capacity, the bigger screen, and the multitouch functions. So, the classic iPod would really be a sore sticking point in Apple’s line up (though, with this reasoning, I am wondering why Apple’s keeping the iPod Shuffle at all…). 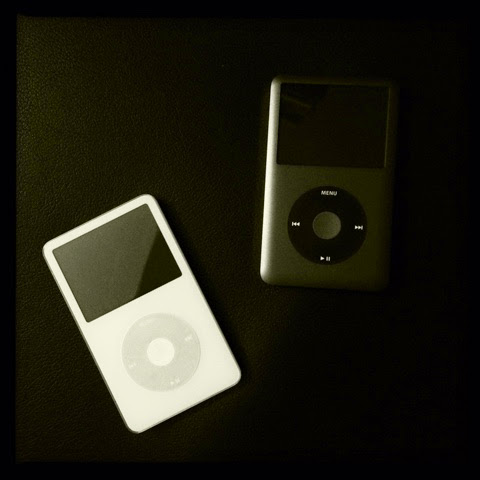 But, the iPod Classic will always have a big place in my heart. The iPod 5.5 Gen, the Classic's forebear, will have the enviable position as the device that strung me to the Apple ecosystem, that made me succumb, most of the time, to Apple's RDF, that made me mourn when Steve passed away... And as I type this piece on an iPad (the 4th generation), I can't help but feel that, when the iPod 5th Gen & Classic die on me, I will definitely feel the pain of a great loss...

All photos made with the iPhone 5s/iPod Touch and the iOS app Hipstamatic.